I’ve known Nick since we were preteens living in the same neighborhood. He was king of the the garage band performers. He went on to become the most prominent lead guitarist/vocalist of local bands. He later taught guitar to many aspiring guitarists in the area. One such notable is Vinnie Moore.
He also did guitar repairs, setups, modifications and customized detail work.
He was the doctor for all my guitars throughout his career. His dedication to the craft was remarkable so when he informed me that he had become a luthier I signed up immediately for him to build me a custom jumbo body six string acoustic/electric. He included me in the selection of the wood, hardware, and electronics. I told him I wanted the sound hole to be the shape of a heart and he was graciously compliant with that request.
The finished product is beautiful and I’ve performed with it publicly countless times, and have had people compliment me on the sound of my Bucci countless times.
I have one of the first Buccis so the signature headstock does not have his logo but this is the best acoustic guitar I’ve ever owned. In my extended music family and beyond, Nick is revered.

"Although I often use this instrument as a tool of the trade, there inevitably comes the moment when I stop and simply admire it. Then I allow myself to hold it and caress the strings causing music to flow from my heart out through the heart shaped sound hole. This is one of the first guitars that Nick Bucci ever created. Thank you for helping to unlock something inside of me, Nick"

I don’t know where to start in writing a testimonial for Nick Bucci. It is such an honor for me to be asked to be included in the group of individuals who have been touched by this creative, passionate, and humble human being. I first met Nick in the mid-seventies jamming in an old factory building. His commitment to tone and composition made the experience extraordinary. Over the years we have maintained our friendship as my lumber business evolved as did his involvement in repairing and building guitars. I am holding a tele style guitar Nick built for me.  It is made from a solid block of butternut, think swamp ash but with the beauty of the walnut family and plays and sounds like a dream. The cherry flat-top acoustic he built early on is the only guitar I actually keep in my house of the over 40 guitars I own. It’s an old friend that makes me smile every time I pick it up. 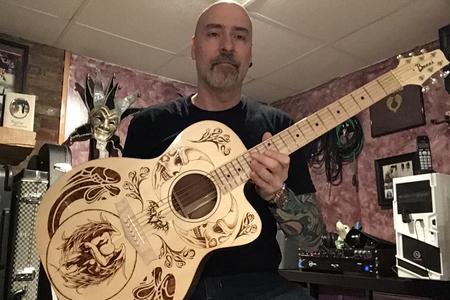 My name is Rick Fusco. I've been playing music professionally for 40 years. I have been fortunate enough to have Nick Bucci of Bucci guitars as my luthier over the years. That's a lot of years because I'm old now :-). About 20 years ago I decided to have Mr. Bucci (respect your elders, people) build me a guitar. Nick and I sat down with a few of my most played electric guitars and we took many measurements of the necks, body shapes, and contours and between my preferences and Nick's elite craftsmanship he created my all-time favorite personalized Bucci Guitar. It is the Bucci RF 001. This guitar is like no other guitar. Moreover, it is like all of my favorites. Thank you Bucci guitars for your incredible expertise and consistent attention to detail over the years. Buy a Bucci; you will not be disappointed - and it's Italian. -Rick Fusco 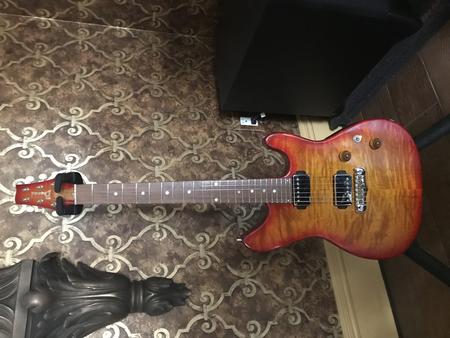 These are handmade guitars with a slightly shorter scale that are very light and easy to play. They are incredibly versatile!! I recently picked up one and cannot believe my good luck, just an amazing guitar that is the most comfortable instrument I've ever played, EVER!

Beautiful sounding and playing guitar. Love it!! -Gene Mullins, with the late Kenny Jones' guitar; Kenny's art in the background... 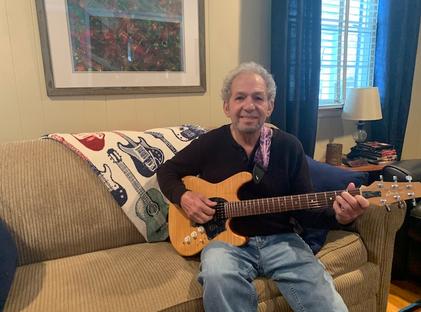 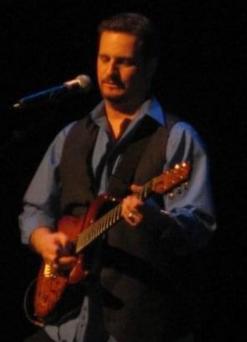 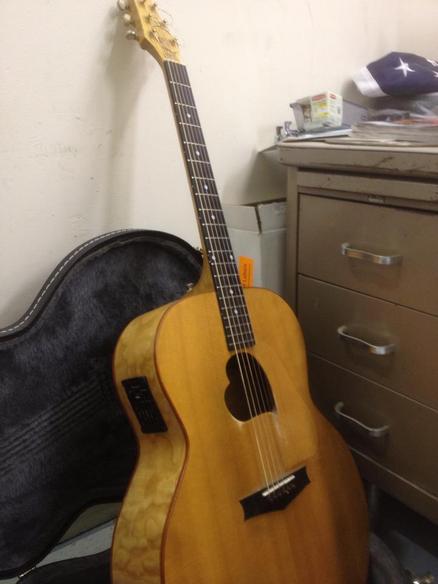 Some pictures of my favorite steel string.  Plays like an electric but sounds like the best steel string I’ve ever played.  -Skip Barthold

I have had the pleasure of a Bucci electric for several years now that sounds amazing. Nick works with his clients to understand the sound, feel and look of the instrument to make each guitar a work of art.  Also, Nick assembled two basses for me back in the 1980s that I love. He is the only person I take my basses and guitars to for repairs or modifications. They always come back sounding and feeling exceptionally better. Highest recommendations!  -M. Cooke Harvey 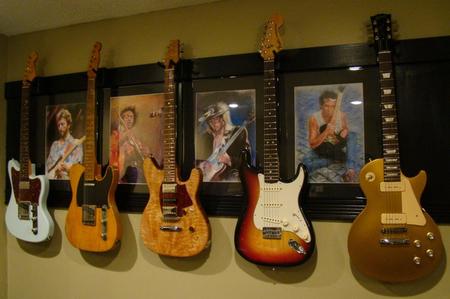 This guitar is one of my top five favorites. And believe me with over one hundred owned in my history, I rate it in the upper class!
The best of both worlds: like a Gibson; like a Fender, but its own feel. The true test of playing this guitar is... I want another one!
Thanks Nick Bucci and Bucci Guitars ❤️. -Joe Cardoso

Nick has been doing work on my guitars for years and we have become friends. I’ve had a chance to play his guitar that he also built and when I put it in my hands it just felt right!! I knew I had to have one, so when the chance arrived I took it and he built me my own special guitar exactly how I wanted it!! It is perfect!!! In my opinion there’s no guitar luthier/builder out there as good as Nick, and he also is just an amazing friend and person. Then you take his playing... he could play for any band in any genre.. it doesn’t get better than Bucci!!! Thanks for all you do, Nick!!!  -Brian Moore

My Nick Bucci AV-1 guitar is extremely expressive in all sonic ranges, and quite frankly, the most treasured guitar I own. -Tony Ventura

I had the honor of studying guitar with Nick Bucci! During a few of our lessons, he would play this guitar he had recently made. For months I pestered him to let me buy it. He finally gave in and I was a new proud owner of a custom-made Bucci guitar! I was hoping that some of his DNA would sink into my hands, but honestly I’m still the same mediocre guitarist... I will say that this fine instrument is treasured in my collection and the craftsmanship is impeccable. A great feeling and sounding guitar! If you have the chance to get one, you should! -Roger Hoilman 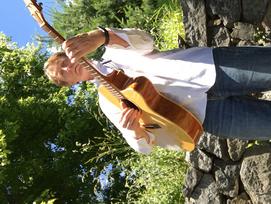 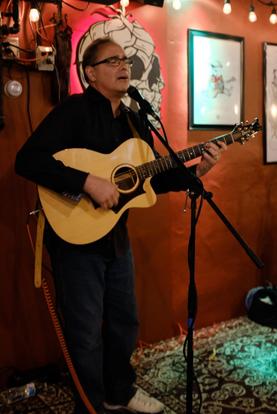 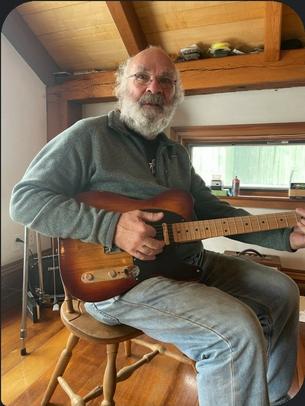 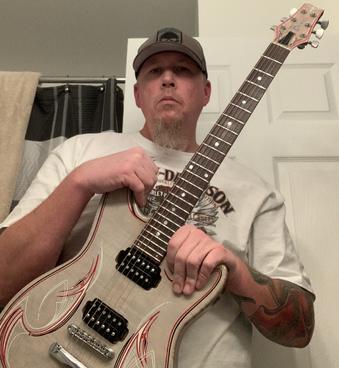 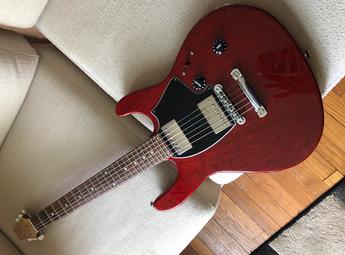 I can not express how thrilled I am with my Bucci Custom Guitar. When I first spoke to Nick, I said I was looking for a new Acoustic guitar but wanted to do something different. I sent him an example of what I had in mind and he was nice enough to allow me to do the custom pyrography artwork on the Bucci Guitar he built for me. The top is Spruce (which was very challenging to burn) and the back and sides are Cherry. The finished product is stunning to look at but it also has a beautiful sound and feel. My previous #1 guitar was a Taylor which I loved because it was so easy to play. I can honestly say that I am blown away by how Nick set up this Bucci Guitar. It is the easiest playing guitar I've ever picked up. Absolute gem! To be a small part of this build process was a thrill and Nick was great to work with and an amazing luthier.  -Andy Shields